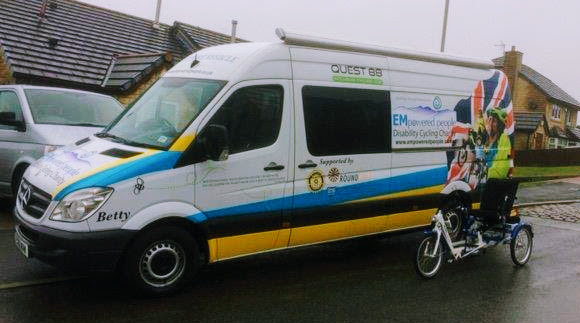 In 2014 I received a telephone call from Elizabeth Shepherd whose son was very keen to be involved in cycling. I mentioned that we were holding an event around Anglesey, and if she and James could manage to get to the Island they could see what the charity is all about.

We meet James and Elizabeth along with one of James carer on the Friday. They spent the full day and night with us and left on the Saturday.

I hadn’t heard from Elizabeth until the 22nd of January this year when she rang me with the terrible news that James had passed away on the 8th December of a heart condition, which was not related to his disability.To say that the family is devastated is a huge understatement and to make matters worse Elizabeth is just recovering from a major operation on her hip and leg.

Elizabeth wanted to offer James recumbent Trike to EMpowered people, which they purchased after their visit to Anglesey where James had so much enjoyment riding his bike around the local lanes.

The telephone call from Elizabeth offering the bike to the charity was very generous, and will enable us to offer more interested riders to have the benefit of cycling.

We arrived at James house in our Support Van Betty and met Elizabeth and her daughter Jo who welcomed us and presented us with James immaculate Draisin Wheelchair Trike, and a fabulous donation to the charity.

James bike will become a very important part of our fleet of Inclusive Cycles, and will make its first appearance on our Taster Day 11th March and will be a vital part of the charities ability to fulfil our ambitions of offering everyone who wants to feel the wind on their face and have a sense of independence in their lives through cycling.

We send our condolences and thoughts to Elizabeth and her family